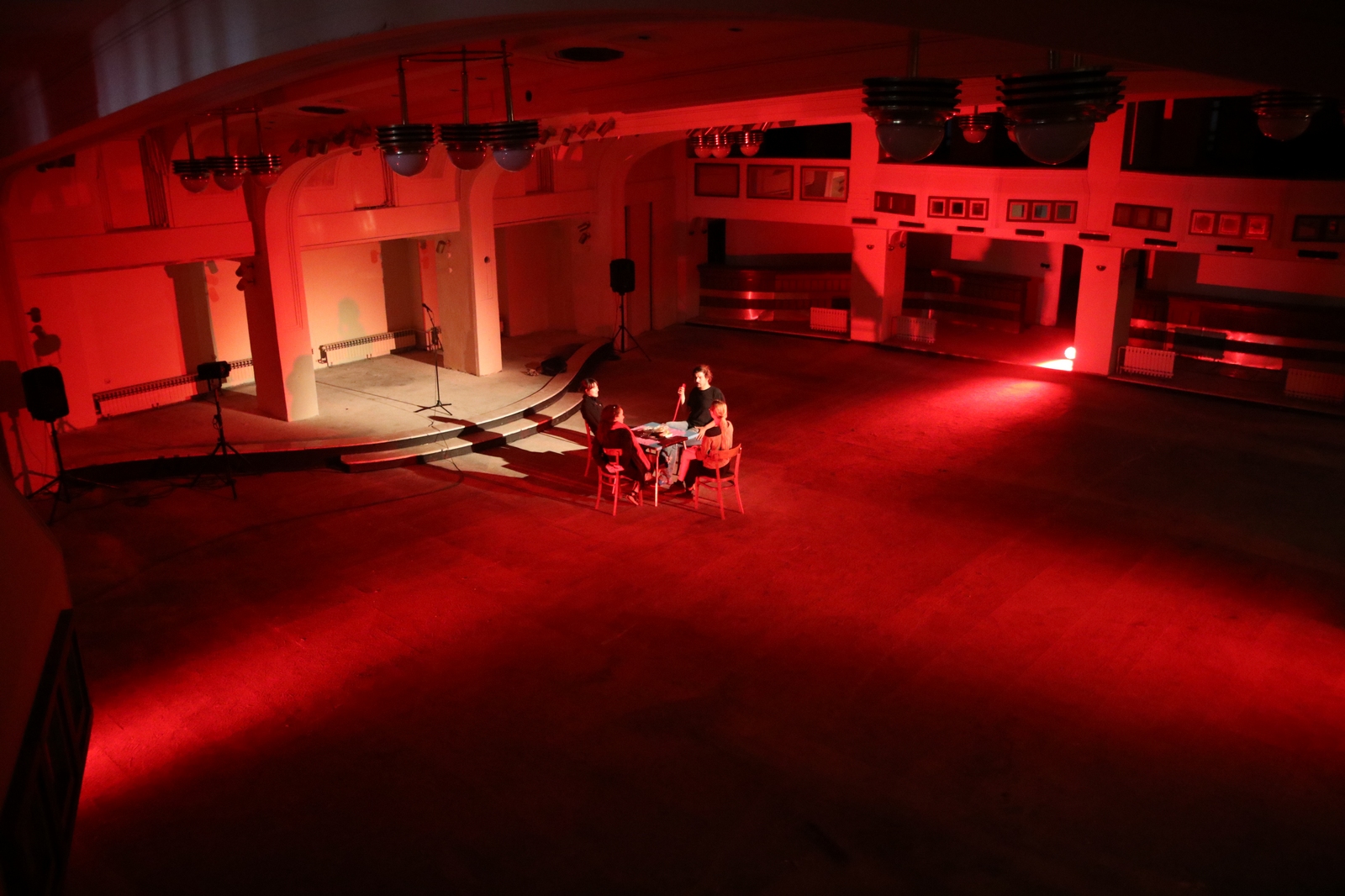 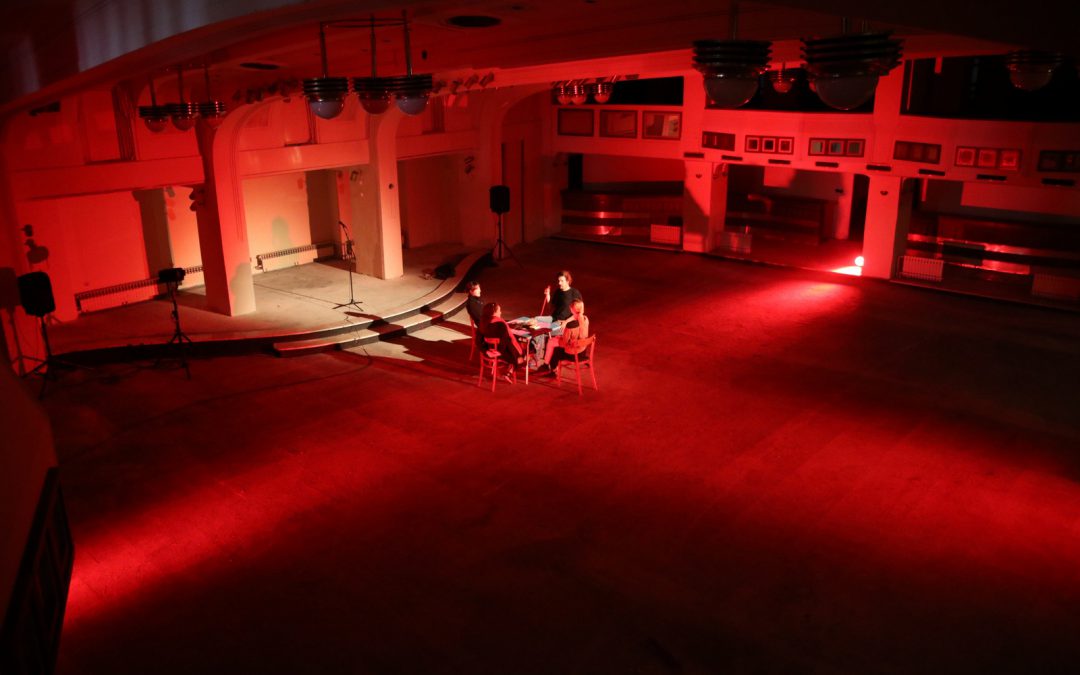 IVANA PERANIĆ is a theatre maker, performer, choreographer, and educator. She graduated from the International School of Corporeal Mime, London, and also holds a Bachelor’s degree from the Faculty of Philosophy, Rijeka University. In London, she was a member of the renowned theatre company Theatre de l’Ange Fou and then a collaborator of the artists’ platform Performance Klub Fiskulturnik. She is a co-founder and director of the arts organisation Creative Laboratory of Contemporary Theatre KRILA (Rijeka). Throughout her long artistic and educational practice, she has collaborated with various local, national and international performance artists and educators, and participated in numerous festivals both in Croatia and abroad. She is a member of the Croatian Dancers’ Association and Croatian Centre for Drama Education. She is also the main project coordinator of the European project Make a Move, an art incubator for contemporary European non-institutionalised and independent theatre, co-funded through the Creative Europe programme of the European Union.

Anda Cadariu: You studied Theatre in London and Philosophy in Rijeka. How do these two fields go together?
Ivana Peranić: I studied at the Faculty of Philosophy, but I studied Croatian Language and Literature, and I actually started to make theatre in my student days. I was a member of a student theatre company, Teatar Rubikon, initated by my brother, who had very strong views on a different type of theatre, which is not classical or text-based. At that time, in Rijeka, there were not many alternative theatre groups doing physical theatre; we were a rare phenomenon. There were some dance groups, but very few physical theatre companies. The technique we were all attracted to was Meyerhold’s Biomechanics, which we got to know through a workshop led by Gennadi Bogdanov. It was an intuitive and self-taught approach, in which we would explore this type of theatre in a group of passionate and enthusiastic non-professional students… but my brother was the leader of the group, with a strong vision and enthusiastic spirit. 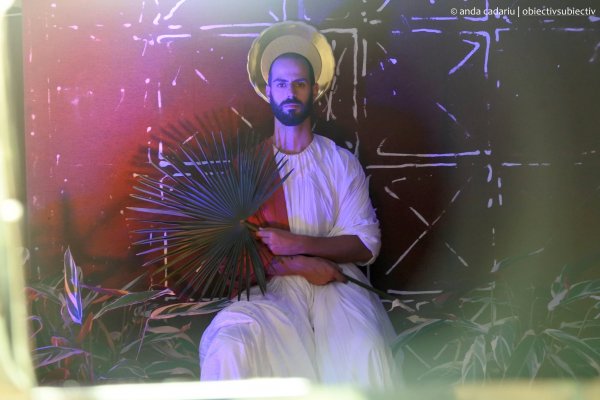 Anda Cadariu: And did you go to London after this experience?
Ivana Peranić: Yes. I experienced theatre in a very idealistic way. There was a moment when I knew nothing about it, but I felt amazing to be a part of the group, to express myself physically, non-verbally, to study at the Faculty of Philosophy and actually meet different people. For instance, we collaborated with a musician, Ivan Šarar, who is now Head of the Cultural Department of the City of Rijeka. We had lots of different collaborators – set designers, costume-makers… we did a full production. I was not constrained by any theory, any physical technique, everything was really very pure.
We worked together for quite a few years, we traveled a lot, and we were acknowledged and partially funded by the City of Rijeka. Then, at one point, when I finished my studies, I realised that I would like not only to experience this type of theatre, but to study it, too. I also had this thought that I would like to go to London. So, we were at an alternative theatre festival in Croatia and, after our show, we went to an afterparty, and then my friend and I hitch-hiked. A car stopped, and we met a girl, Lara Ritoša Roberts, who was studying in London at the time, at the International School of Corporeal Mime. She gave my friend a contact there. So, my friend gave me that contact. When I went to London and settled down a little bit, I found the school and went to see what was going on there, and I fell in love with the Corporeal Mime technique. It is between theatre and dance, a very dramatic technique, it is not pantomime, it is not dance, it is physical theatre. It is well-structured and it has a special vocabulary. I had excellent training and superb teachers: Corinne Soum and Steven Wasson. So, I fell in love at first sight. I thought I would only spend one year in that school, but I soon realised I could not achieve a high level of physical theatre expertise in one year, so I stayed for my postgraduate studies, too. Then I became a member of the Theatre de l’Ange Fou company. I worked with them on Orpheus’ Complex and The Man Who Preferred to Stand, which is a performance composed of pieces by Étienne Decroux, a dramatic corporeal mime repertoire, and also postmodern pieces by Corinne Soum, Steven Wasson and Thomas Leabhart.

Anda Cadariu: You are a theatre maker, a performer and a pedagogue. How do these parts of your life blend into each other?
Ivana Peranić: It depends on what I’m working on as a theatre maker: I can be an author, a performer or a choreographer. But with the educational part… that’s something else. I always use the methodology of co-creation, especially with kids and young people. We always do devised work. We do a lot of improvisation and I challenge them to be imaginative, to be creative, to make up stories together, to create their own characters. I don’t want to come and do things that are interesting for me, but not for them. For me, it’s important to be a facilitator who will then give them space and also teach them technical things – how to use their voice, how to use their bodies, how to create together with others. Mostly, I do this through games, through some specially-designed tasks and through giving them a lot of trust, freedom and constructive feedback. 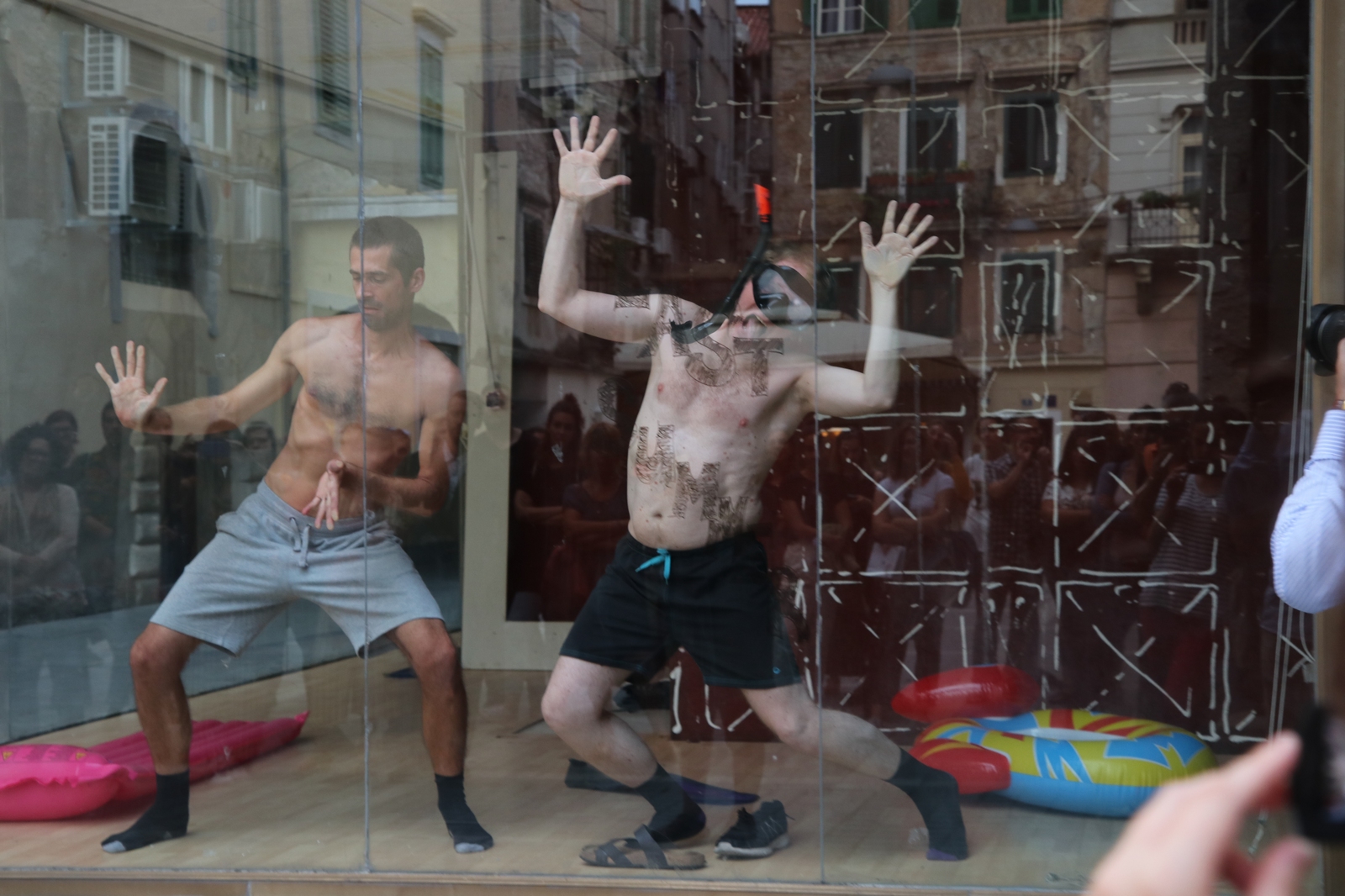 Anda Cadariu: You are also the artistic director and founder of KRILA. Could you talk a little bit about your organisation?
Ivana Peranić: I had been in London for eleven years, and then, at one point, I realised I would have better opportunities to work in Rijeka than in London. I didn’t know the sector in London as well as I know it in Rijeka. Here, I could easily get a space, get funding, and also, I never went to London in order to stay – I knew I would come back, I just didn’t know I would come back eleven years after. So, when I did, I had a very clear vision of what I wanted to do: to found an arts organisation, to do my own pieces and, also, to initiate educational projects. In order to get funding, I had to have an organisation. I had two choices: I could found either a civic association or an arts organisation – and I decided for the latter. So, with my partner and artistic collaborator at the time, Jorge Correa Bethencourt, and with the help of my brother, Zvonimir Peranić, I founded KRILA. 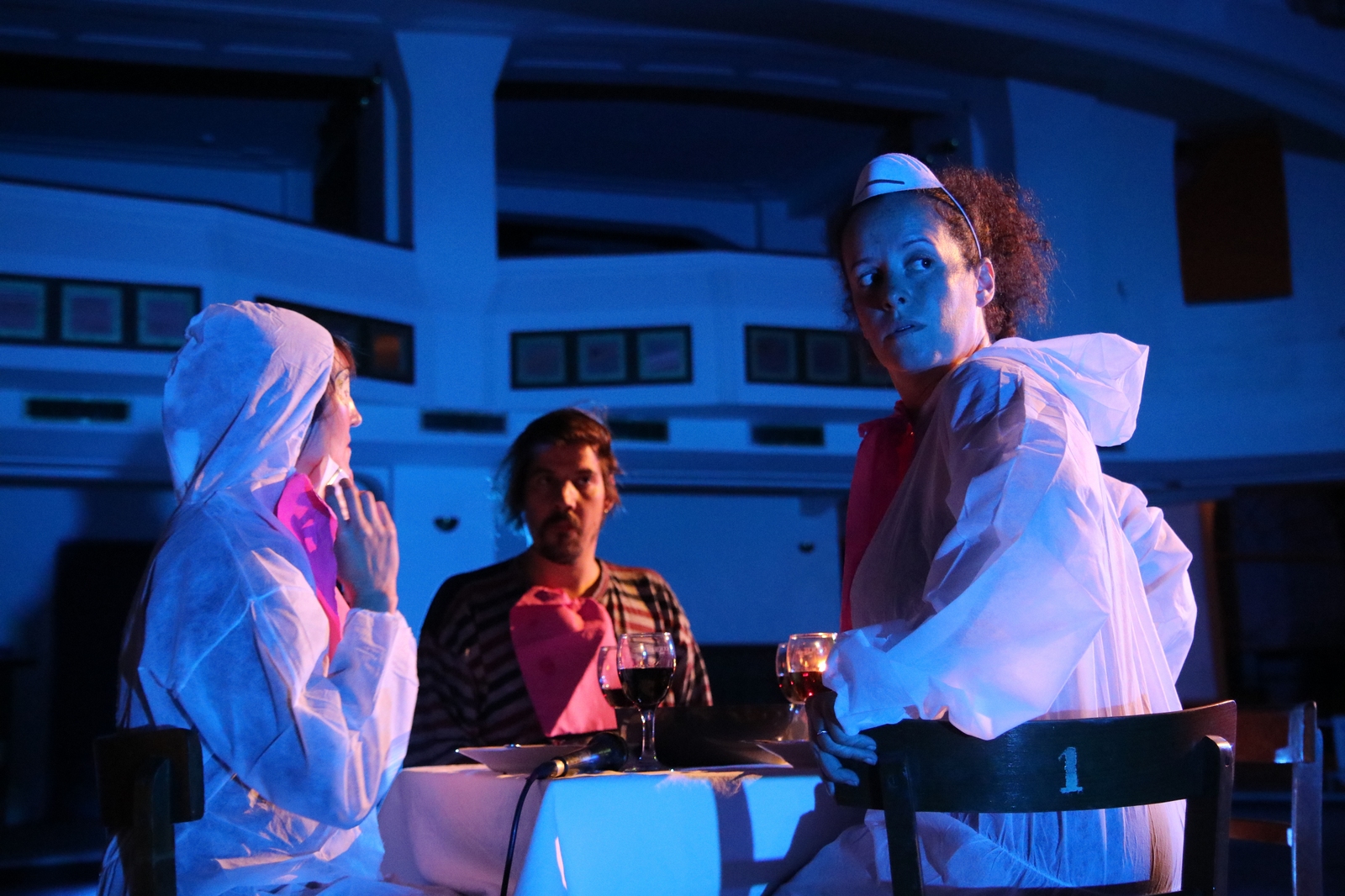 Anda Cadariu: If I wanted to take a look at the landscape of Croatioan contemporary culture, where would I find KRILA? What sets it apart? Why is it special?
Ivana Peranić: We are not really working on a national level but on a local and international one. The local independent scene is not thriving, it hasn’t been in the last twenty years, because the conditions are very difficult and there are not many long-standing projects. Maybe we have two or three openings per year in this type of theatre. And what makes us special… I think just to exist in this type of environment.

Anda Cadariu: How long has KRILA been around?
Ivana Peranić: Since 2011, but I’ve been on the independent scene since 1993.

Anda Cadariu: We are now both in Rijeka, both a part of the Make a Move European project, in which KRILA is the leading partner, organising the Second Lab within the project. This Lab is focused on site-specific theatre, but before diving deeper into details about it, can you briefly present the Make a Move project and its
Ivana Peranić: Make a Move is an art incubator and the project was created out of the need of independent European artists to work together. It’s a bottom-up project and it is developed in the context of Rijeka European Capital of Culture 2020. I initiated a collaboration with my friends and colleagues from London; KRILA organised three partners’ meetings in Rijeka, one in 2016 and two in 2017. We managed to organise these meetings in order to continue an initiative of mine called Unreal Cities, which is included in the programme of Rijeka 2020. So, we met, we discussed and exchanged our creative practices and then the idea of Unreal Cities became more clear: it will be an artistically-guided tour in Rijeka, in which we are going to map those city points which have a strong identity. But, at the same time, we didn’t know how to proceed. I was very lucky because then I met the cultural manager and professional fundraiser Barbara Rovere, and she was interested in this proposal and she started to work with us. And so, Make a Move was born, as a project that can give independent theatre-makers time and resources to collaborate, develop ideas and exchange good practices. It is an incubator, a supportive environment where international artists can meet and learn new skills in digital practices, in site-specific theatre practices and also in the way they communicate with the audience and the stakeholders.

Anda Cadariu: The resident artists worked together with local artists here, in Rijeka – they do that in every Lab. We have recently seen their work-in-progress presentations, which were attended by an audience. How do you feel about what happened during these presentations?
Ivana Peranić: They were wonderful. They showed a high level of performance, and all the twenty artists involved gave the city of Rijeka new creative energy. Their experience, impressions, and visions of the city made me feel grateful. I am also grateful for their dedication, passion, and trust and I am very happy with the results. 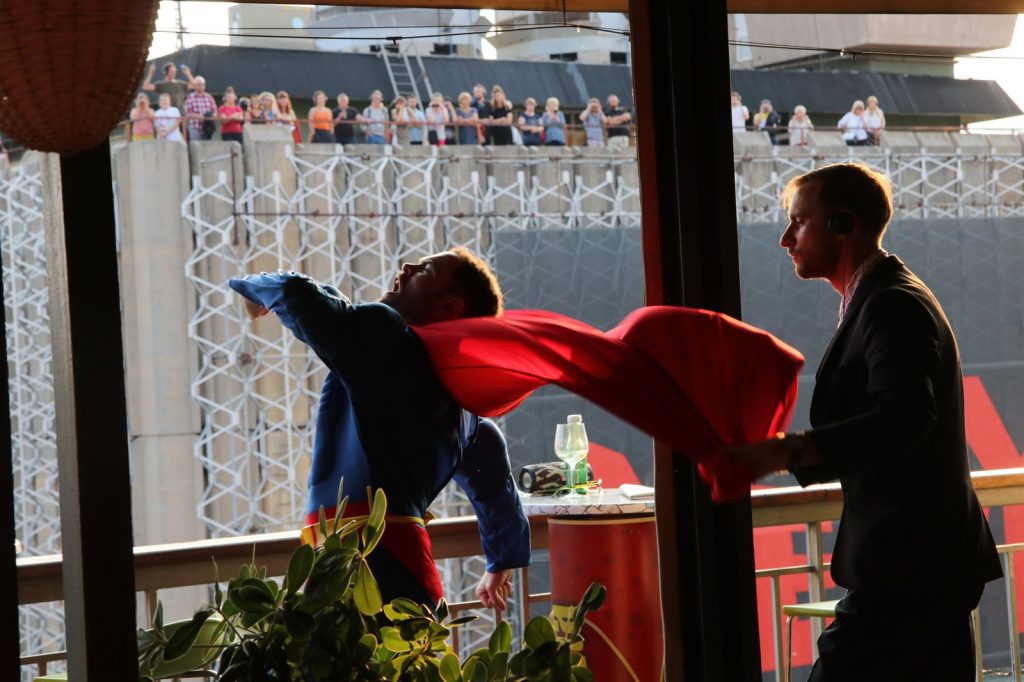 Anda Cadariu: The next Lab will take place at the University of Arts in Târgu-Mureș. Romania, in December. What are your expectations when you think of this third (and last) laboratory?
Ivana Peranić: Make a Move is a pilot project and it is based on action-research methodology, which means that we take one step, then we reflect on it and then we take another step. So, there are many little steps and I think these Labs are very big steps, so we must plan together. The way in which I planned the Rijeka lab took a lot of time, I gained a lot of insight from the external evaluation, from the internal evaluation and I will collect information on the Rijeka Lab, then I will draft the direction for the Târgu-Mureș Lab and I will communicate with the partners and associate partners.

Anda Cadariu: What does Make a Move mean in your career as a manager and as an artist?
Ivana Peranić: As a manager, Make a Move is a challenge for me because I have never managed such a project before. I am learning a lot. And as an artist, I think this exchange with the others stimulates my creativity. It is a great opportunity for me to meet other artists, to see how they work and to collaborate with them.